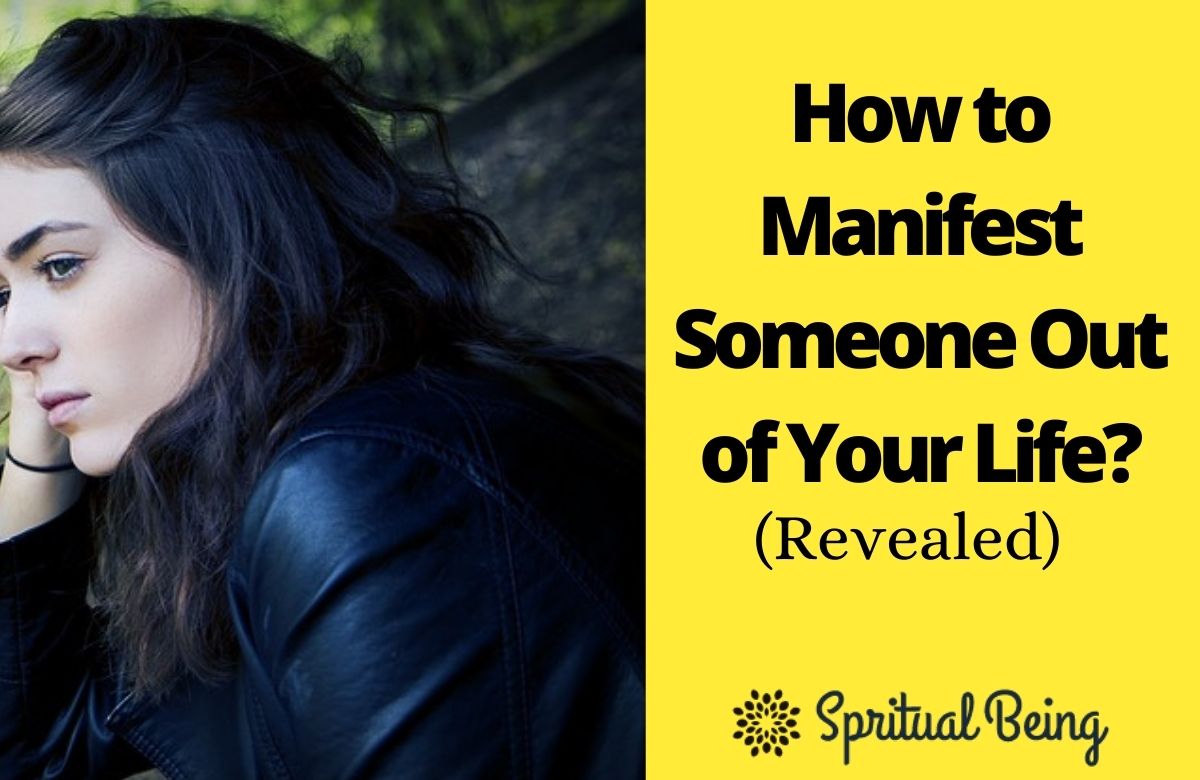 Are you wondering how to manifest someone out of your life? You’re in the right place!

Negative and toxic people who give trouble, disrespect you, or bring only negativity should be removed from your life. It is better to stay away from such people as they always make you feel frustrated and annoyed.

And, in this post, we’re going to talk about different ways to manifest someone out of your life using the law of attraction in detail.

Before that, here is a quick answer to how to manifest someone out of  your life:

Keep reading to find the in-depth answer to how to manifest someone out of your life. Plus, find out the reason why we attract negative people and how they negatively impact our lives.

Table of Contents show
How to manifest someone out of your life? (7 Effective Ways)
#1 Don’t react to the situation
#2 Have high self-esteem
#3 Don’t focus on that person
#4 Don’t resist
#5 Create distance with them
#6 Block them on Social media
#7 Wish for their success
Why do we attract negative people into our lives?
#1 You share common beliefs and emotion
#2 You don’t want to hurt others by saying “NO”
#3 Having low self-esteem
#4 You attract what you believe
#5 Not having goals
Why should you avoid negative people in your life?
Reason#1: Negative people discourage you and affect your thinking
Reason#2: You can’t get rid of them
Reason#3: Life is too short
Reason#4: They like drama
Conclusion

How to manifest someone out of your life? (7 Effective Ways)

#1 Don’t react to the situation

To stop the loop, don’t react, allow everything as it is as if you don’t care, and accept everyone as they are as if they don’t create any emotion within you. People with high self-esteem are confident and self-loving, they believe in themselves and are not influenced by other people.

Learn to feel good about yourself, and don’t be afraid to let go of toxic people.

Have a clear goal and focus on it, and spend time with positive and encouraging people. Negative people don’t like to spend time with people who disagree with them and don’t have the same belief.

#3 Don’t focus on that person

If you’re constantly thinking about a person hoping he won’t call you or chase you, you are imagining the situation in your mind again and again.

Instead, focus on things that you’re grateful for. Think of their positive trait rather than criticizing their negative ones.

The more you resist something, the more it persists. So, if you don’t want someone to sit next to you, and you’re resisting it then you’ll find the same person sitting next to you.

The better approach is to face them, tell yourself in your mind that you’re ready to have them around you and it doesn’t affect you.

#5 Create distance with them

Creating distance and time, if possible, with people you hate can easily manifest someone out of your life.

If they try to contact you, either ignore them or tell them that you’re busy working so call back later.

#6 Block them on Social media

Block those people from your social media, your email list, and block their phone numbers.

If you’re not seeing or interacting with them then they can’t negatively impact your life.

Don’t feel bad for blocking someone, it is going to benefit both you and them.

#7 Wish for their success

If someone is chasing you to be in a relationship even if you rejected him, instead of having negative thoughts about him, wish him a good relationship with another person.

By doing so, you’re creating a positive vibe that is good for you and your friend is also happy being in a relationship.

So, wish them success in their life so that they can get out of your way.

Why do we attract negative people into our lives?

Have you ever wondered why we attract negative and toxic people in the first place? It has a lot to do with our thoughts and behavior. Here are some common reasons why someone attracts negative people:

You know that opposite poles of a magnet attract each other and the same pole repels, but in the case of human relationships, the opposite is true.

Researchers have found that we’re likely to marry someone similar to us and share common beliefs and experiences. You see, we tend to like someone who has similar emotions, who agree with what we believe and think, and who has the same emotion as we do.

Let’s say, you’re traveling to Nepal, home of Mt. Everest and the birthplace of Buddha, and you met two tourists just like you but one happens to be from your hometown. Who is going to resonate most with you? The guy from your hometown, right?

The experience we have in our life creates emotion. Emotion is energy radiated from our body into the surrounding which is sensed by people of similar energy and when that happens we create a bond just like two oxygen atoms having similar energy create a bond to make oxygen.

If you have negative thoughts and emotions frequently, you will become habituated to them. And, you will attract similar experiences and people in your life to feel the same emotion again and again. That’s why we attract negative and toxic people to get what we unintentionally desire: negative feelings and emotions.

#2 You don’t want to hurt others by saying “NO”

Having a kind gesture toward others is very rewarding and satisfying. While you intend to help someone, people who are toxic and negative might take advantage of it.

You may have a belief that you’ve no value unless you’re doing something for someone. You’ve assumed that good people never say NO to anyone, so you try to please everyone by doing everything to make them happy compromising your happiness. And, you will eventually attract and spend time with the people that are not supposed to be in your life.

Self-esteem is having a sense of personal worth or value which means how much you appreciate and like yourself.

People with low self-esteem have no confidence and trust in themselves so they listen to everyone’s opinions and do what they’ve told them to do.

Most toxic people try to take advantage of people, who have low self-esteem and self-worth. It is easy to cheat a person who is weaker than someone who believes in themselves. So, start loving yourself, and don’t let others’ opinions dictate your life. #4 You attract what you believe

Maybe, you’ve been living in a town where crime rates are high and it is very hard to find good people. In the past, maybe, you’ve been in some bad relationship and you assume that you’re not worthy enough to be happy.

Your experience with negative people in the past has created a belief within you that you’re destined to be with such people. You believe that you don’t deserve a better life, a better partner, and a better friendship. So, you only attract people that satisfy your belief system.

One of the reasons why negative people surround you is not having goals in life. When you have a goal to do something bigger, you don’t have time for trivial conversations with unwanted people in your life.

You become busy with your schedule and stop wasting time on unnecessary things.  Now, negative people don’t bother you anymore because they now know that you’re not going to obey their every command so they stop trying to impact your life.

Read also: How to manifest a boyfriend overnight?

Why should you avoid negative people in your life?

Reason#1: Negative people discourage you and affect your thinking

When you have a struggling phase or are facing adversity, you need someone who will encourage you, support you and cheer you up.

Instead of helping you, negative people enjoy seeing you struggling so they discourage you and give you negative feedback.

If you spend enough time with them, they eventually succeed at changing your belief and pattern of thinking and you start to act and think like them. They are very good at this. They are energy-sucking vampires who suck your positive energy to do anything great in life.

Reason#2: You can’t get rid of them

Even if they are negatively impacting your life, it is hard to get rid of them because you’ve been in a relationship for a long and you don’t want to hurt their feelings.

Even though they destroy your credibility as other people judge you by the people you hang out with, you’re not able to let go of them.

Instead, you try to change them, which is a vain attempt anyway.

Reason#3: Life is too short

You don’t have enough time to spend on nonsense that is not helping you to grow and have joy and happiness.

Spending time with grumpy people makes your life miserable and they take your precious time.

Toxic people like drama, they enjoy it, drama is like oxygen for them without it they think they’re worthless and lifeless. In addition to that, they want to involve you as a character in the drama.

Read also: How to manifest divorce peacefully using the law of attraction?

We attract people with similar beliefs and emotions in our life as they share the same experience and resonate with us.

You may have had bad experiences in the past with negative people, which causes change in your belief negatively so that you’re easily attracting toxic people.

Negative people impact your life, steal your precious time, and compromise your credibility.

You can’t change circumstances, you change yourself. Change your thought, beliefs, and behavior to manifest someone out of life. Wish them success to get them out of your life. 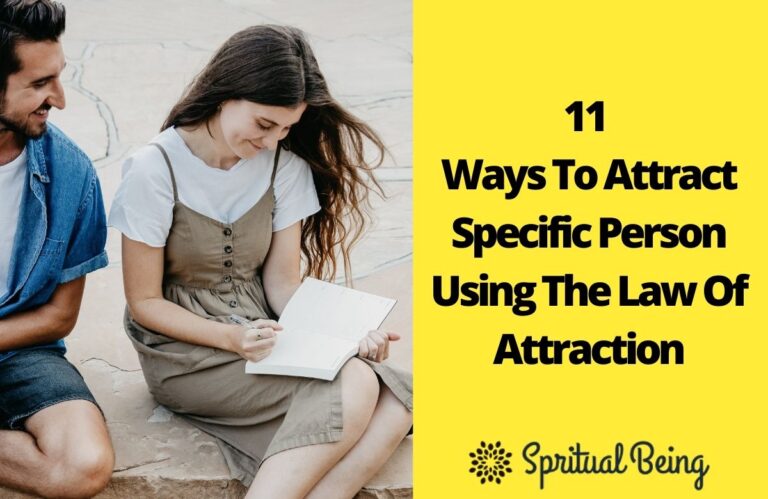