Love not only gives us joy and happiness, but it also offers us a lot of health benefits.

However, not all are fortunate to get into a good relationship for various reasons. Having love blockage is one of the common reasons for not able to manifest love and relationship.

Love blockage is a habit and behavior hidden in one’s subconscious mind that they are not aware of it. Such habits and behavior, which get in the way of love and relationship, are created by limiting beliefs.

Below, you’ll find more about love blockage, how it is created and impacting your life, and how to deal with it.

Ready? Let’s jump into it.

Table of Contents show
What is Love Blockage?
How Do People Get Love Blockage?
Why Unblock it?
How To Remove Love Blockage?
7 Most Common Love Blockage and How to Remove Them
Underestimating Yourself
Having False Belief About Love
Creating Worst-Case Scenario
The Grass is Always Greener on the Other Side Mentality
Being Desperate
Playing a Role of Victim
Reliving the Past
Conclusion

What is Love Blockage?

Love Blockage is an internal belief, habit, and certain behaviors that block you from receiving love or having a fulfilling relationship.

It is hidden deep in your subconscious mind created by your negative belief and experience related to love and relationship. And, you unknowingly behave and think in such a way that repels love from your life.

If you’ve such a love block ingrained within you, you’re not going to manifest and attract joy of love in your life even if you want to have a relationship and try hard to get it.

How Do People Get Love Blockage?

Society and culture have a major role in creating the beliefs and behavior of a person. Likewise, if you have a love block that prevents you from love and happiness, then it’s not your fault. You’ve been raised and taught to think like that.

Most people fail in love during teenage when a relationship is mainly about physical attraction and they end up with unwanted pregnancy which causes stress, guilt, and frustration. They’re teased, shamed, and laughed at by their friends.

And people associate love with negative feelings like frustration, anger, confusion, resentment, and guilt. This stays with them and gets in their way to have happy and fulfilling relationships later in life.

You may have seen some couples quarrel or they’re not happy after being married. This might have cause to you think that people in relationships are not happy and so you may have decided to not have one.

Whatever the reasons for having a love blockage are, you need to identify and fix them immediately to enjoy your love life. Fortunately, there’s a simple solution to get rid of your hidden love blockage.

We’re a social species that need each other to grow and evolve. We need relationships in our life to feel joy, share things, and get out of a feeling of emptiness. Love is essential for our body and mind.

Love block creates tension and stress as you have a desire for love but at the same time, you’re opposing it unconsciously. It hurts your self-esteem and confidence.

How To Remove Love Blockage?

To remove it, you need to be aware of your thoughts and behavior first.

Become an observer of your thoughts so that you know whether they are positive or negative about love or being in a relationship. Observing your thoughts makes you aware of them so that you can take action to replace them with something positive and encouraging.

If you find yourself thinking negatively about love, stop and say “Change!”

You don’t have to condemn yourself and feel bad for having a love block within you. Remember, it’s not your fault. It can be solved by constantly observing and replacing it with a positive thought.

7 Most Common Love Blockage and How to Remove Them

The most common love block that people have is not feeling worthy of love. They think that they’re not a special person and nobody cares about them so they never try to be in a relationship.

Even though they truly like someone, but they hold themselves back and never approach him/her believing it is not going to work. They believe that other people are better and good-looking.

They don’t appreciate their physical appearance, believe they’re fat or skinny, or ugly so they tell themselves that they do not deserve love and nobody is going to like them.

If you’re not loving yourself, how can you expect anyone to love you? Moreover, having a self-limiting belief and thought can send a negative vibe in the universe which attracts similar people or events that make you feel the same emotion again and again.

Having False Belief About Love

We have so many misconceptions about love that we gained over the years from our own experience or media.

Nothing can be further from the truth than believing that love is responsible for one’s failure.

Some people also think that love is just another name for sex.

Such beliefs are not going to help you if you want to have a happy relationship. So, if you have any such false beliefs about love and relationship change them immediately.

People like to imagine the worst possible scenario in every situation to protect themselves because they’ve had a bad experience before and they don’t want to be caught off guard again.

Maybe they’ve had a bad experience in a relationship in the past making them think twice before any decision.

But, imagining a worst-case scenario makes them think about the worst things that could happen, though it has less possibility. And they focus on the negative part out of the infinite possibility of the event which eventually ends with getting the worst result.

The Grass is Always Greener on the Other Side Mentality

We like to think that grass is always greener on the other side by comparing it with others.

Most people compare their love life with that of others and get sad thinking that they’re happy.

If you’re always seeking a perfect partner, you will never get one. No one is perfect; the grass on the other side is not always green.

Nothing can hurt more in the process of manifestation of love than being desperate. If you’re desperate for love, you’re feeling a lack that blocks your manifestation.

Instead of being desperate, love yourself and believe that the universe will give you a true soulmate.

Playing a Role of Victim

To gain sympathy from people, most people who are blocking love play victim roles. They blame others for their situation.

They like to get dumped so that they can have the attention of people.

People who relive the troubled past create a blockage for the future relationship.

Someone broke up with them, for whatever reason, in the past which created pain and suffering for a long time by thinking about it.

By repeating these old nostalgic memories has created a habit and changed their thinking pattern.

And they have now become a person who gets failure in love no matter what they do.

To change your future for the better, stop living in the past.

Love blockage prevents you to get into a fulfilling relationship that results in sadness and loneliness. It is the result of limiting beliefs about love that are hidden deep in our subconscious.  We develop love blockage from our past experiences and from people or events that influence us.

To get rid of love blockage, you should constantly observe your thoughts and change them if you have a negative one. You may have heard about the law of attraction. It is a philosophy suggesting that your thoughts create your reality. You become or achieve what you ask with complete faith. From celebrities to ordinary folks like many of us have used the law of attraction technique to attract their desire into reality and have made… 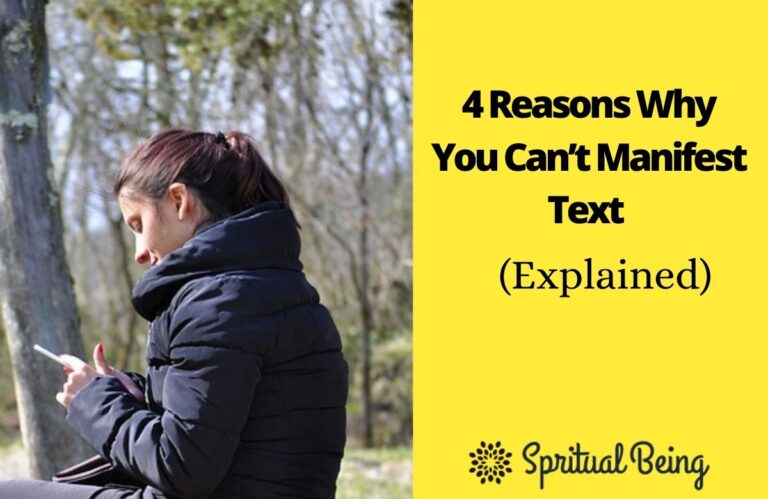 The idea of manifesting a text from your ex or crush makes your heartbeat go faster. You’ve tried it, but you can’t manifest text. What could be the reason for not getting a text while other people are getting success at it? Why can not you manifest text? Here are reasons for it: You may…